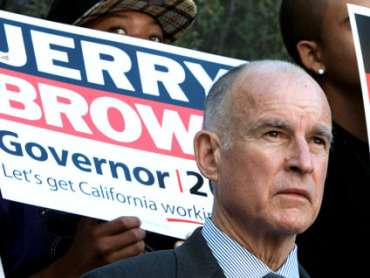 Governor Moonbeam must be if he thinks ANY tax increases will pass at the ballot box.

Gov. Jerry Brown, who is considering what tax increases to propose to voters in November 2012, acknowledged this morning that polls are generally unfavorable but said voters might approve sales and income taxes.

“Sales and income could pass under certain circumstances,” he told The Bee. “It could. And it couldn’t.”

Brown said that such a measure would require broad-based support.

“That means business, that means agriculture, that means labor, that means no significant body to jump up and down and stigmatize it,” the Democratic governor said before speaking this afternoon at a green energy summit in Las Vegas.

Brown has been considering a November 2012 ballot measure since he abandoned his bid this summer for temporary tax extensions in a budget deal. Labor leaders who could fund such a campaign believe they must settle on a plan within about two months.

With Obama sinking in the polls and with California voter turnout likely to be lower than 2008, Brown is either HIGH or having delusions of grandeur. The California economy is very poor and voters are not going to vote more taxes on themselves, when they are either out of work or facing potential layoffs.

There are ways to settle the California budget deficit problem, but the Democrats, including Brown do not want to cut government spending and piss off their political constituencies that depend upon state money. But, Brown will be faced with the reality and either cut spending or print money himself in the Capitol basement.