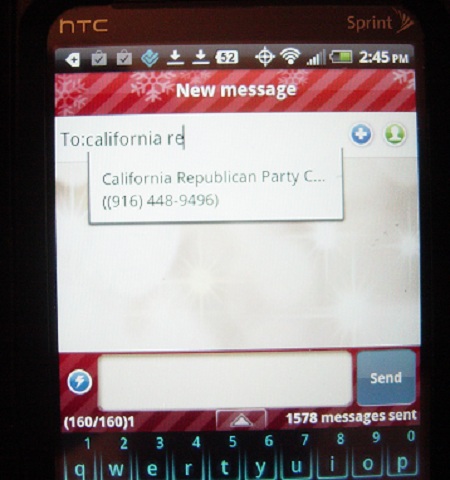 I foresee some massive fraud problems here, but I suppose it is keeping up with the times.

California is the first state in the nation to allow political contributions through what is becoming a popular method of donating to charities and disaster relief effort. (Heaven knows, a lot of our candidates need disaster relief!)

Here’s what the FPPC has to say on the subject:

California is the first state to allow campaign contributions by text message. The rules approved by the Commission in October are now in effect. The main goal is to broaden voter participation by offering a mechanism to include citizens in the political process who normally do not participate in campaigns and elections, particularly the younger generation.

It is now up to the wireless carriers and campaigns to implement systems that permit contributions by text message. The concept is similar to texting a donation to a disaster relief fund or a charity. A person can simply send a text message to donate to his or her favorite candidate or cause. The donation amount would be included in the donor’s monthly phone bill and when the bill is paid, the campaign would get the contribution.

If there is money to be had, the POLS for sure will try to access it.

Good luck with the record keeping and the disclosure though.