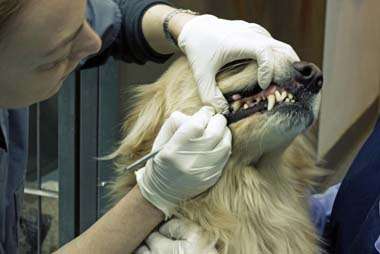 At least with regards to a bill allowing dog groomers to expand their scope of practice.

Legislation that would allow pet groomers to brush the teeth of dogs, cats and other pets died in the Assembly Business, Professions and Consumer Committee Tuesday without a single “aye” vote.

It was the latest skirmish in a decades-long political war between the groomers and veterinarians, who now have the exclusive legal right to brush teeth and perform other dental procedures on animals.

Proponents of Assembly Bill 2304, including its author, Assemblyman Martin Garrick, R-Carlsbad, said allowing groomers to do cosmetic brushing would encourage better dental care because of lower cost. But veterinarians contended that loosening the regulation could imperil pets.

Remember there was a similar skirmish with the California Veterinary Board, regarding the use of groomers using dental ultrasonic scalers. So, this was an attempt to circumvent this board with legislation.

I am positive the issue will resurface in subsequent seesions of the California Legislature.

If there was ever a “juice” bill on a professional scope of practice issue, this is it.

“Wilk has committed to protecting California taxpayers by signing the Pledge and encouraging other candidates to sign as well,” said Congressman Tom McClintock.   “He continues to show the political courage necessary to oppose and fight efforts to increase our taxes.”

“California will never be economically free while we are chained to our present tax structure,” said Wilk.  “The Governor and politicians in Sacramento are wasting too much time trying to find ways to raise taxes, rather than cut spending and every hard-working Californian should pay attention to that on this Tax Day.

Scott Wilk is a longtime resident of the Santa Clarita Valley. He is a husband, father, a small business owner and his life’s work has been serving the public in both behind the scenes capacities and as an elected official.

Scott has worked as the Chief of Staff for California Assemblymembers Tom McClintock and Paula Boland as well as the District Director for Representative Howard P. “Buck” McKeon. He was recently re-elected to a second term on the Santa Clarita Community College Board of Trustees after being appointed in 2006 and elected in 2007.

I have known Scott for decades and he is as conservative as his former boss Rep. Tom McClinotck, especially on tax policy.

The authors of two pieces of a “California Homeowner Bill of Rights” championed by Attorney General Kamala Harris postponed legislative hearings on their measures Monday.

The Assembly Banking and Finance Committee had been scheduled to consider a bill that would prohibit banks from foreclosing on a property while the borrower is trying to modify a loan.

Another bill would require lenders to create a single point of contact for borrowers trying to modify their loans.

Both bills were put over until next week. A Senate committee, meanwhile, is scheduled to consider the same proposals Wednesdays.

The deadline for fiscal bills to pass policy committees in their house of origin is April 27.

Lawmaker, often target of investigations, zeros in on bullet train

U.S. Rep. Darrell Issa, the dogged Republican investigator from Vista who has himself been an investigative target, is taking on California’s bullet train.

In a letter last week, Issa, chairman of the House Committee on Oversight and Government Reform, told the California High-Speed Rail Authority to preserve two years worth of documents, records and e-mails concerning its “use of federal funds” on the controversial $68 billion bullet train project.

Issa said his committee wants the documents for a probe that will focus on alleged misspending of federal funds, as well as on “allegations concerning conflicts of interest and possible mismanagement; and how these factors might impact taxpayers.”

Meanwhile, Central Valley farmers and environmentalist groups from the San Francisco Peninsula have objected to the project’s proposed route and have filed lawsuits to get it changed.

In his letter, Issa wrote that the federal government already has spent more than $3.6 billion on the California project and may be asked to foot the bill for half of the entire cost.

The documents Issa identified in his letter appear to include material also being sought by the conservative watchdog group Judicial Watch.

Claiming it was being stonewalled in its quest to learn about the California project, Judicial Watch filed a federal Freedom of Information Act lawsuit against the government in February.

It’s become a pattern in California. An exhausted Legislature finally completes work on a tardy state budget. Soon afterward, it becomes obvious the budget is a farce stitched together with funny numbers and delusional assumptions.

With the 2012-13 budget, however, the process has accelerated. Even before Gov. Jerry Brown issues his May revised budget, decisions made by lawmakers, the courts and federal bureaucrats – combined with bad news on the revenue front – make it close to impossible to expect a spending plan with a shred of credibility or accounting substance.

The most basic problem is that the governor plans to introduce a budget premised on the idea that voters in November will approve a midyear increase in income taxes on the wealthy and sales taxes, with “trigger cuts” hammering public schools if they are rejected. This screwball brinkmanship bodes terribly for schools if it fails and sets a horrible precedent if it succeeds. Only in Sacramento could a budget strategy that evokes a legendary National Lampoon cover – “buy this magazine or we’ll kill the dog” – be seen as inspired.

Meanwhile, most outside experts believe the governor exaggerates the revenue the tax hikes would generate. The Legislative Analyst’s Office says Brown’s expectations of a huge capital gains windfall are $6.5 billion too high.

And the 2012-13 fiscal year won’t even begin in balance. Instead, there’s likely to be a multibillion-dollar shortfall left over from the current fiscal year because of the inaccuracy of Brown’s revenue estimates and assumptions from the last budget fight. State reductions in human services and health programs funded partly with federal dollars or governed by federal rules have been the target of court challenges and second-guessing by the Obama administration. A state Finance Department spokesman estimates this has wiped out nearly $2 billion in budget savings since last summer. Guess what: More such maneuvers are contemplated in the 2012-13 budget.

Dan Walters: Jerry Brown’s up to his old say-anything tricks

However, as Brown attempts to qualify and gain voter approval this year for a ballot measure that would raise sales and income taxes, he has been reverting to type, once again issuing pronouncements and political slogans that are specious and self-contradictory.

He has insisted on several occasions that “100 percent” of the proceeds from his tax hike would go to schools when, in fact, the schools get little or nothing in net terms. But on other occasions he has touted it as a way of balancing the non-school portions of the budget, which is more accurate.

He also described his measure as a “millionaires’ tax,” even though the increased sales taxes would apply to everyone and the income tax hike would kick in at $250,000 in income.

When braced about the latter, he said that “everybody who makes $250,000 becomes a millionaire very quickly if you save.” But last week, during a radio interview, he backtracked, saying, “I’m not calling it that” and blamed the characterization on the state Democratic Party.

“What happened,” Brown insisted, “was, I sent my petition out to my email list, and I put an attachment of the actual signature petition, and the Democratic Party had put some thing, some little explanatory material and put ‘millionaires’ tax.’ “

Flip-flopping and shifting the blame. It is, as the inimitable Yogi Berra once observed, “déjà vu all over again.”

And, here is Dan Walters in his daily missive: Jerry Brown calls out the Democrats in the Legislature: