Here are the details for the Santa Clarita Valley fundraiser next Wednesday evening that I posted a few weeks ago.

Today, the Scott Wilk for Assembly Campaign is proud to announce that it has received the endorsement of the San Fernando Valley Young Republicans.

“Scott has been an advocate for smaller government and conservative ideals for many years in and around the Valley. As a college board member, small business owner, and parent, we feel that he represents the membership base of our organization,” said Samantha Fugitt, Chair of the San Fernando Valley Young Republicans. “As the only candidate to sign the “Tax Payer Protection Pledge,” Young Republicans across the Valley will work hard to make sure we send Scott to Sacramento.”

Scott Wilk is a longtime resident of the Santa Clarita Valley. He is a husband, father, and small business owner. His whole life’s work has been dedicated to public service, working behind the scenes as Chief of Staff for Assemblymembers Tom McClintock and Paula Boland. He also served as the District Director for Representative Howard P. “Buck” McKeon. He was recently re-elected to his second term on the Santa Clarita Community College Board of Trustees after being appointed in 2006 and elected in 2007.

Another in a series of endorsements for Wilk, including the Ventura County Republican Party.

The Really Patricia? Blog, the satirical look at Patricia McKeon’s run for the California Assembly has returned. Remember the blog had previously been shut down which I posted here.

Certainly, this will be a source of enlightenment and hilarity……

Remember: Friday is the last day for policy committees to pass fiscal bills introduced in their house. So, there will be some action around the Capitol this week.

A measure to abolish California’s death penalty qualified for the November ballot on Monday.

If it passes, the 725 California inmates now on Death Row will have their sentences converted to life in prison without the possibility of parole. It would also make life without parole the harshest penalty prosecutors can seek.

Backers of the measure say abolishing the death penalty will save the state millions of dollars through layoffs of prosecutors and defense attorneys who handle death penalty cases, as well as savings from not having to maintain the nation’s largest death row at San Quentin prison.

Those savings, supporters argue, can be used to help unsolved crimes. If the measure passes, $100 million in purported savings from abolishing the death penalty would be used over three years to investigate unsolved murders and rapes.

The measure is dubbed the “Savings, Accountability, and Full Enforcement for California Act,” also known as the SAFE California Act. It’s the fifth measure to qualify for the November ballot, the California secretary of state announced Monday. Supporters collected more than the 504,760 valid signatures needed to place the measure on the ballot.

“Our system is broken, expensive and it always will carry the grave risk of a mistake,” said Jeanne Woodford, the former warden of San Quentin who is now an anti-death penalty advocate and an official supporter of the measure.

The measure will also require most inmates sentenced to life without parole to find jobs within prisons. Most death row inmates do not hold prison jobs for security reasons.

Though California is one of 35 states that authorize the death penalty, the state hasn’t put anyone to death since 2006. A federal judge that year halted executions until prison officials built a new death chamber at San Quentin Prison, developed new lethal injection protocols and made other improvements to delivering the lethal three-drug combination.

A separate state lawsuit is challenging the way the California Department of Corrections and Rehabilitation developed the new protocols. A judge in Marin County earlier this year ordered the CDCR to redraft its lethal injection protocols, further delaying executions.

Gasoline was selling for $3.33 a gallon, Jerry Brown was attorney general, and California was bracing for a budget crisis when the state’s hourly minimum wage rose to $8 in early 2008.

Fast forward to now, and much has changed: Gas is almost a dollar higher, Brown is governor, and the state is reeling from years of red ink. But the minimum wage hasn’t budged a cent.

New legislation would change that, ensuring future increases for the state’s lowest-wage workers while letting lawmakers evade political heat by taking the hot-button issue out of their hands.

Assembly Bill 1439 by Assemblyman Luis Alejo would prohibit the minimum wage from being lowered as consumer prices fall but would mandate increases as prices rise. The indexing would be expected to hike the minimum wage about 14 cents next January, but more importantly, it would set the stage for what could be annual hikes in years to come.

Alejo, D-Watsonville, bills his measure as a way to boost the economy by putting more money in the pockets of workers struggling to provide food, clothes and housing for their families.

“When minimum-wage workers have more money to spend, they spend it,” he said. “They can’t afford to save it. That is good for all businesses.”

The state Chamber of Commerce has labeled AB 1439 a “job-killer” bill. Other opponents range from the California Restaurant Association to the California Farm Bureau Federation.

“Now is not the time to increase the cost of doing business in California, when businesses are just now showing signs of recovery,” said Jennifer Barrera, a chamber lobbyist.

AB 1439 puts the minimum wage on “autopilot,” Barrera said, “which we don’t think is appropriate.” Lawmakers should not simply let statistics dictate rates without considering other factors, she said. 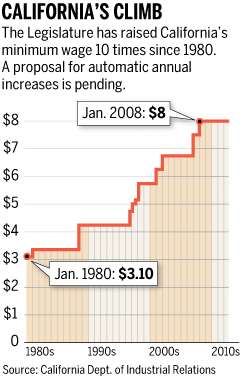 Whether California was under siege from crime is questionable, but Republicans bludgeoned Democratic politicians as soft on crime, and Brown didn’t want to be a victim.

He and legislators responded with lock-’em-up crime measures aimed at putting more felons behind bars. California’s prison population, about 20,000 inmates, started climbing, and late in his governorship, Brown agreed to place a small construction bond issue on the ballot.

By the time Brown returned to the governorship in 2011, the prison population had increased eight-fold, and its costs 20-fold, becoming a major factor in the state’s chronic deficits.

Despite spending countless billions on new prisons, they were so overcrowded and dysfunctional that the federal courts had seized control of prison medical care and were threatening to take over the entire system. Last year, the U.S. Supreme Court ordered California to reduce the prison population by tens of thousands of inmates.

Brown and legislators responded with “realignment,” which diverts lower-level felons from prison into county jails, along with the money to pay for their care and supervision.

California prison overhaul would save $1.5B a year

California prison officials released a wide-ranging reorganization plan Monday that calls for halting a $4 billion prison-construction program and bringing back all inmates held out of state.

It came at a time when the nation’s largest state prison system is being transformed by ongoing state budget deficits, federal court orders and a realignment ordered by the governor that shifts its focus to the most violent and dangerous offenders.

The changes are possible because of a state law that took effect Oct. 1 that shifts lower-level offenders from state prisons to county jails. That shift is the main consequence of a federal court order requiring the state to reduce its prison population as a way to improve inmate medical care.

Lowering the inmate population eliminates the need for $4.1 billion in construction projects and will let the state Department of Corrections and Rehabilitation reduce its annual budget by $1.5 billion, officials said.

The plan calls for returning to state prisons by 2016 about 9,500 inmates who are currently housed in private prisons in other states. That alone would save the state $318 million a year.

Enjoy your morning and Dan Walters in his daily video discusses the “historic” nature of California’s upcoming primary: