What a shocker – NOT!

Patricia Mckeon is trying to shut me down?

It’s been no secret that the Mckeons hate this blog. They have actively been trying to silence me for some time now. This is no longer just an opinion, but a matter of fact. First they falsely accused an innocent man, Scott Wilk, of running this blog. (There are too many links so just Google “Patricia Mckeon lies“) They made this accusation to the LA County DA, a Mckeon endorser, in an attempt to dirty Wilk’s name.

Well, that didn’t stick and they were told to pound sand.

So now they are trying to get the domain for this blog turned off in yet another attempt to silence free speech.

Where are these people from, China? Does our constitution and the rights it guarantees  mean anything to Buck and Patricia Mckeon?

Here are the details that I now am aware of.

Well, I wish them good luck, because I don’t think they will be successful.

But, if they are – for some odd reason, I have extended the invitation to the writer to blog here or over at flapsblog.com anonymously.

AD-38: Patricia McKeon Decides to Meet With REAL VOTERS and Refuses to Attend Debates or Forums

I guess Patricia McKeon will NOT show up to any more forums or debates in the Santa Clarita Valley.

Assembly candidate Patricia McKeon is not likely to speak at any more public forums in the Santa Clarita Valley, her campaign spokesman said Tuesday.

“I think we’re done with public forums,” Joe Justin said before a forum scheduled Tuesday evening by the League of Women Voters and the 34th District Parent-Teacher Association.

“There are no undecided voters in this area,” Justin said, referring to the Santa Clarita Valley. “We’re now going to be talking to real voters.”

“We may do a forum in Simi Valley,” Justin said.

McKeon has appeared only once at a public forum with her Democrat opponent, Edward Headington, and in front of at least three Republican-only events.

McKeon, wife of Rep. Howard “Buck” McKeon, R-Santa Clarita, told a luncheon forum at the Lincoln Club last month that she would not shy away from public debates and forums, but was not about to give the same talk to the same audience over and over.

McKeon, school board member Paul Strickland and college Trustee Scott Wilk are seeking the Republican nomination for 38th Assembly District in the June primary. The lone Democrat in the race is Headington.

McKeon did not attend the Tuesday night forum that drew Wilk, Strickland and Headington.

Well, based on Patricia’s previous performance, this is probably a smart move for her.

You know, limit the opportunity to make a continuing ass out of yourself. Like she did here in this video:

I don’t think the voters will take too kindly to a candidate who wants to avoid discussing their ideas and policy stances while her husband the local Congressman has his defense contractor cronies fund her mass mailings to voter’s mailboxes.

Come on, Patricia, 90 per cent of the race is just showing up…..right?

Hernandez’s blood-alcohol level was 0.08 percent at the time of his test, police said in a written statement. His case will be turned over to the Contra Costa District Attorney’s Office for review.

Hernandez’s office did not immediately respond today to the announcement.

State law deems motorists with a blood-alcohol level of 0.08 percent or higher to be driving under the influence of alcohol.

Hernandez, D-West Covina, was stopped by officers in the parking lot of the Crowne Plaza Hotel about 2 a.m. on a weekday, March 27. His car had been spotted weaving inside a lane on Concord Avenue, officers said.

Hernandez has maintained he was not impaired but DID refuse a breath test at the scene of the arrest.

I will update the story later. 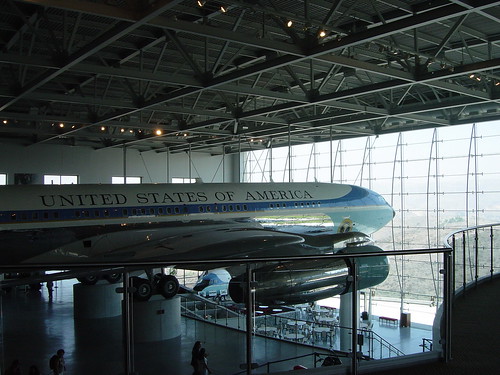 Air Force One at the Reagan Presidential Library in Simi Valley, California

Remember: Friday is the last day for policy committees to pass fiscal bills introduced in their house. So, there will be some action around the Capitol this week.

State Controller John Chiang acted beyond his authority when he withheld pay from state legislators after concluding the budget they had passed last year was not balanced, a Superior Court judge tentatively ruled Tuesday.

The Legislature meets its obligation to pass a budget when it sends the governor a bill that “on its face,” proposes spending that does not exceed revenue, Sacramento County Superior Court Judge David I. Brown wrote in a ruling that he will consider finalizing at a court hearing Wednesday.

State Senate leader Darrell Steinberg (D-Sacramento) and Assembly Speaker John Pérez (D-Los Angeles) sued Chiang in January, alleging he improperly interpreted the voter-approved Proposition 25, which docks legislators’ pay if they fail to pass a budget by June 15 each year. The Legislature passed the budget by the deadline last year, but Chiang said it was not balanced and withheld their pay for 12 days.
Brown agreed with the legislators that the “Controller has no authority to review the Legislature’s estimate of General Fund revenues and appropriations for the coming fiscal year as set forth in the budget bill, to make his own assessment of whether the budget bill passed by the Legislature complies” with the Constitution “and to unilaterally enforce his opinion by deeming the salaries and expenses of the Members of the Legislature to have been forfeited…”

The carcass of a dairy cow slated to be rendered at a Fresno County plant is infected with mad cow disease, federal and plant officials announced Tuesday.

The discovery of mad cow disease — only the fourth in U.S. history and the first in California — was made during routine testing of a carcass headed to the Baker Commodities plant in Kerman.

Federal officials would only say that the carcass came from a “Central California” dairy. Valley agricultural officials say they don’t know whose cow it was. The central San Joaquin Valley is one of the largest dairy producing regions in the nation, with hundreds of dairies.

In announcing the find, federal and state officials were quick to reassure the public that the food supply is safe.

“Milk and beef remain safe to consume,” said Karen Ross, California Department of Food and Agriculture secretary. “Because of the strength of the food protection system, the cow did not enter the food or feed supply.”

Dennis Luckey, executive vice president of Baker Commodities, said that as part of the U.S. Department of Agriculture’s surveillance system, carcasses that come through the company’s dead-stock handling plant in Hanford are skinned and their brains randomly tested for bovine spongiform encephalopathy, or mad cow disease, before being rendered in Kerman. He said the plant generally services the central San Joaquin Valley.

The diseased carcass came into Baker’s Hanford plant last Wednesday, was tested that day and samples sent to a University of California laboratory. The results came back inconclusive, but further testing at a USDA lab in Ames, Iowa, confirmed the cow was infected.

Is a California public pension overhaul dying this year?

A key legislative committee isn’t going to act on a package of public pension reforms proposed by Gov. Jerry Brown and adopted by Republicans in their own bills.

Assembly pension committee chairman Warren Furutani said in a letter that surfaced today that GOP measures that mirror Brown’s 12-point reform plan won’t be heard in his committee. Furutani also co-chairs a special conference committee that is working on public pension reform, and bills could surface there.

“I believe it is appropriate this year to limit the bills considered this year in the policy committees to those that are not within the purview of the Conference Committee,” Furutani said in an April 18 letter to Assemblyman Cameron Smythe, R-Santa Clarita.

State Sen. Lois Wolk wants to encourage – not require – that health care workers get annual flu vaccinations if they come into contact with patients in hospitals.

No right-thinking person could possibly oppose her legislation. But in our dysfunctional Capitol, public health has become a contested issue. Too often, lobbyists place the interests of the organizations they represent ahead of what’s best for the rest of us.

Wolk’s main opposition doesn’t come from conservatives who want nothing to do with government. It comes from unions, specifically those that represent nurses and health care workers.

Bonnie Castillo, the California Nurses Association’s chief lobbyist, made a point of telling me that the union “highly recommends that all nurses receive vaccinations.”

But Castillo says Wolk’s bill steps on workers’ rights, or at least bargaining rights, by requiring that health care workers wear surgical masks if they refuse to get flu shots.

In her view, there are many reasons not to wear masks. They’re uncomfortable to wear. They might scare patients who might why the nurse is wearing one. Being required to wear a mask is like a “Scarlet Letter,” Castillo said.

“What’s really problematic is if you’re punitive and require nurses to wear a Scarlet Letter, which divulges private health information,” Castillo said. To which Wolk replied that Nathaniel Hawthorne would be insulted that the title of his great 19th-century novel had been so badly mangled and misused.

“They should be embarrassed,” the Davis Democrat said.