Amazon to Recapture Up To 80 Per Cent of Local California Sales Taxes?

But, now Amazon will be constructing fulfillment centers in California and making deals with local governments to win up to 80% of the sales tax back.

As part of a pact reached last year with state lawmakers, some online retailers agreed to begin collecting sales taxes this fall. About half of the projected $316 million raised in the first full year is expected to come from merchandise sold by Amazon, which is also setting up two California fulfillment centers that will employ at least 1,000 workers each.

San Bernardino and Patterson, where the centers will be located, will gain not only jobs but also a tax bonanza: Sales to Amazon customers throughout California will be deemed to take place there, so all the sales tax earmarked for local government operations will go to those two cities. It’s a windfall so lucrative — about $8 million a year initially for each city — that local officials are preparing to give Amazon the lion’s share of their take as a reward for setting up shop there.

Talks with Amazon about a so-called sales-tax rebate are still in the early stages. But in Patterson, a struggling Central California community of 21,000, Mayor Luis I. Molina said he’s ready to do what it takes to help his city.

As I said before, the only ones who will lose on taxing the internet are the California consumers themselves.

Now, some of the tax money, which was supposed to achieve “fairness” for the brick and mortar stores will be going back to Amazon.com anyway.

Only the Democrats in the California Legislature and lame-brained California Governor Jerry Brown could craft such a crappy deal for California consumers and taxpayers. 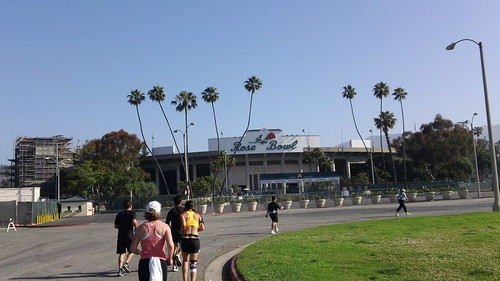 The Rose Bowl, Pasadena, California during May 20, 2012 Pasadena Half Marathon

Today is the last day to register to vote in the June 5, 2012, California Primary Election.

Governor seeks to cut programs Dems pledge to save

Gov. Jerry Brown’s latest budget proposal attempts to close a formidable $15.7 billion deficit, but the real debate at the Capitol in the next few weeks probably will be over how to cut just a fraction of the big amount.

That’s because about $2 billion in the governor’s budget represents permanent reductions in spending on state welfare, child care and other programs that Democratic leaders in the Senate and Assembly have pledged to protect.

Brown’s other budget proposals might be more controversial with the Legislature if the state weren’t facing such a large shortfall. Those include one-time solutions such as his proposal to seize almost $300 million from the national mortgage settlement that Attorney General Kamala Harris hoped to use to help distressed mortgage payers stay in their homes.

Some of Brown’s other reductions, like delaying the repayment of some loans, won’t cause a stir at all. The Legislature, which can pass a budget by a majority vote, has just under four weeks to approve a spending plan to cover the deficit by the June 15 deadline.

‘Tax the rich’ is the opposite of reform

Gov. Jerry Brown defends his soak-the-rich tax proposal as just. And besides, he says, it’s popular with the non-rich.

Never mind that it’s the opposite of reform, that it would make California’s roller-coaster tax system even more volatile.

But maybe things do have to get worse before they get better. The state treasury is starved for more revenue. The governor is trying to avoid massive cuts to K-12 schools and more swats at the universities. It’s probably not practical to wait for reform.

Brown’s November ballot initiative would whack the wealthy, raising state income tax rates by one percentage point for single-filers earning more than $250,000, by two points for those making more than $300,000 and by three points on earnings exceeding $500,000. Double those income thresholds for joint filers.

The governor also would tack on a token quarter-cent sales tax increase for everyone.

The number of jail beds in Riverside County east of Los Angeles was finally catching up with the region’s rapid growth when state lawmakers passed sweeping legislation that assigned thousands of inmates who would have gone to prison to their local lock-ups instead.

Almost overnight, the county of more than 2.2 million people was booking 200 new inmates a month and began early releases for hundreds of other, less-serious offenders to make room. In the past five months, the county has released 1,500 offenders early in a constant churn that forces jail deputies to decide which of their wards are the “best of the worst,” Sheriff Stan Sniff said.

“Ultimately, it becomes a crap shoot because dealing with these people, the crystal ball only goes so far,” he said.

Like Sniff, many sheriffs throughout the state are releasing local inmates early to make room for offenders who previously would have gone to prison. For more than half of California’s 58 counties, the situation is compounded by prior court-ordered caps on their jail populations.

The law took effect on Oct. 1 and is part of Gov. Jerry Brown’s plan to restructure state government and push more services to the county level. Opponents had cited the dangers of early releases in arguing against the shift, but after seven months, it’s unclear whether the law is leading to a spike in violent crime.

offenses and anecdotal reports of rising property crimes in some areas, but it’s too soon to tell if those cases equate to a trend, said Ryan Sherman, spokesman for the California Correctional Peace Officers Association, the union representing state prison guards.

Law enforcement officials say it will take at least a year before any spike in crime rates can be linked definitively to the realignment.

City Councilmember Tom Glancy, who just last week handed in his letter of resignation to the city, has died. He was 71.

Glancy, a 32-year resident of Thousand Oaks, stepped down from the council on May 11 after his long bout with cancer took a turn for the worse.

In a press release sent out by the city Friday afternoon, Glancy’s wife, Karen, said: “Tom passed away peacefully at home surrounded by his family. He was a remarkable man in every way.”

Enjoy your morning and Dan Walter’s Daily video: Last week was a tough one for California