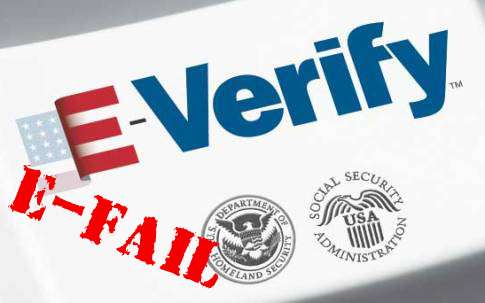 Not really a surprise.

To the applause of illegal immigration advocates and unscrupulous business owners, California Gov. Jerry Brown signed into law AB 1236, an act that prohibits California municipalities from requiring businesses within their jurisdiction to use E-Verify. Titled, the “Employment Acceleration Act of 2011,” the bill is sure to accelerate illegal hiring practices and make it more difficult for legal residents to acquire jobs. Before the bill was signed, over 15 municipalities in California required use of E-Verify for either city contractors or all businesses within city limits: Mission Viejo, Palmdale, San Clemente, Murrieta, Lake Elsinore, Lancaster, Temecula, Escondido, Menifee, Hemet, Wildomar, San Juan Capistrano, Hesperia, Norco, San Bernardino County, Rancho Santa Margarita, Yorba Linda, Simi Valley. Many more California cities use E-Verify for government employees; such use is not prohibited by the new state bill.

As written, AB 1236 prohibits: the state, or a city, county, city and county, or special district, from requiring an employer other than one of those government entities to use an electronic employment verification system except when required by federal law or as a condition of receiving federal funds.

The justifications written into the bill are a smorgasbord of rehashed nonsense spread by open-border groups – e.g. overinflated costs, overstated inaccuracy rates. The bill also cites California’s unemployment rate (currently over 12 percent) and explains that the state “must pursue all avenues in facilitating and incubating job development and economic growth.” How desperate is California if the legislature thinks the only way to reduce unemployment in the Golden State is to promote violations of federal law, perpetuate ID theft, and strain both natural and taxpayer-subsidized resources via increased illegal immigration? If California wanted to reduce unemployment and income inequality it would mandate E-Verify and eliminate other magnets for illegal immigration, thereby driving out the illegal population and forcing businesses to offer a better wage in order to attract millions of unemployed Californians. But putting legal residents to work, improving their wages, and reducing demand for social services apparently makes too much sense.

You know, my Congressman Elton Gallegly who has pushed E-Verify for years in the Congress must be especially frustrated. Hispanic, Democratic, Labor and Big Agriculture organizations all oppose E-Verify in California and nationally.

They all have vested interests in keeping the law the same, which means little if any immigration control.

Big business gets cheap labor and does not have to pay medical or other health benefits to its illegal employees, Labor gets more union dues and the Democrats eventually get more voters.

Besides, even when E-Verify passes the GOP majority House, Senator Harry Reid will never even consider calling the bill up for consideration in the Senate. Plus, it faces a certain veto by President Obama.

The status quo will remain the norm here in illegal immigration.

The last big recession to hit California was in the early 1990s and largely centered in Southern California, as the aerospace industry was clobbered by the end of the Cold War.

Los Angeles County alone lost 437,000 jobs between 1990 and 1994, at least half of them directly tied to military spending. The result was a massive exodus out of the state.

Economists believe that at least 1.5 million Californians, and perhaps as many as 2 million, left the state, with defense workers and their families in the lead. As UCLA economist Jerry Nickelsburg put it: “As their economic opportunities diminished in Los Angeles, they packed up and moved to Texas, Massachusetts, Georgia, or wherever their skills were in demand.”

The exodus made recovery from the recession much easier, simply because it reduced the ranks of the unemployed by several hundred thousand.

By the late 1990s, California had largely rebounded from recession – only to see two other booms and busts in rapid succession, culminating in the current, even deeper recession.

Oddly, even though our economic malaise is worse than the one two decades ago, and appears to have more staying power, we have not seen the mass movement out of the state that we experienced then.

Prompted in part by a three-time South Bay congressional candidate, a group of Los Angeles Unified teachers plans to march to school district headquarters Tuesday in solidarity with ongoing protests on Wall Street and at L.A. City Hall.

“Occupy LAUSD” is the newest permutation of the Occupy movement that has gained steam – and media attention – over the past month since protesters took over Zuccotti Park in New York’s financial district to express frustration with growing income inequality in the face of rising corporate profits.

Protesters with the Los Angeles branch of Occupy Wall Street began camping out Oct. 1 at City Hall, which has seen a densely packed tent city take over the surrounding lawn. Thousands marched through downtown over the weekend.

It’s perhaps no surprise that Los Angeles teachers – known for regularly donning red union shirts and mobilizing against school board actions – would want to join in the protest, especially since labor groups have begun to get support from Occupy L.A. and vice versa.

Those frustrations have been articulated elsewhere – and well before what some are calling “the Occupation” began. But Occupy LAUSD organizers say they have common cause with a movement that conservative critics have termed an un-American call to class warfare.

“There is a natural linkage. The Occupy Wall Street movement is challenging corporatization of America, privatization of the public sphere, and that’s exactly what we’re seeing in our district,” said LAUSD teacher Marcy Winograd.

An antiwar activist who twice mounted challenges against former South Bay Rep. Jane Harman and ran last in spring’s primary against now-Congresswoman Janice Hahn and others hoping to succeed Harman, Winograd is one of two organizers of Occupy LAUSD. She was laid off from her job at Crenshaw High last year and is now substitute teaching in the school district.

Her collaborator is Jose Lara, a history teacher at Santee Educational Complex south of downtown and a member of the board of United Teachers Los Angeles.

The size of the downtown San Diego crowd fluctuated from several dozen to more than 100 people during the day.

Demonstrators also adjusted to the mandate by police late last week prohibiting all but one tent in the Civic Center Plaza, a stark contrast to the movement’s tent city that formed during the first week of the protest.

Protest signs continued to dot the downtown plaza with messages such as “Separation of Corporation and State” and “End the Fed.”

The Lancaster Republican’s office said the injury was sustained “during a friendly sports competition with family.” She also fractured her tailbone in the the fall.

“I want to thank all those who have already sent their kind wishes and thoughts,” Runner said in a statement. “While this will change my office schedule, I will continue to work from home to serve my constituents.”

Runner’s recent injury isn’t her first health scare while serving in the Legislature.