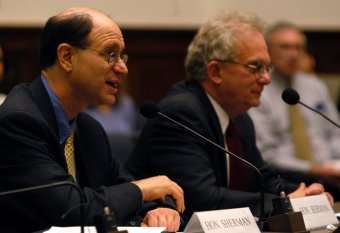 In a clash of Democratic San Fernando Valley titans.

But in the new poll done for Sherman’s campaign, he led a three-way “jungle” primary against Berman and Republican businessman Mark Reed with 42 percent, followed by Reed with 26 percent and Berman with 17 percent. In a ballot test of a two-way runoff with Berman in the solidly Democratic district, Sherman got 51 percent to 24 percent for Berman.

Under California’s new law, the top two finishers in the June primary, regardless of party, face each other in a November runoff. There are expected to be several intraparty, general election races next fall.

“Sherman is simply better known and more popular in this San Fernando Valley district and voters want his visible, local style of representation,” Feldman wrote in the memo.

And, the purpose of the poll is to scare Berman out of the race because the top two will move forward to the general election.

Sherman is better known in the Valley but Berman is a shrewd campaigner and will have a ton of money to throw at the race. The only impediment is the Republican candidate who is likely to siphon off enough votes to come in second regardless of the fact that he will have no hope of winning this primarily Democratic CD.