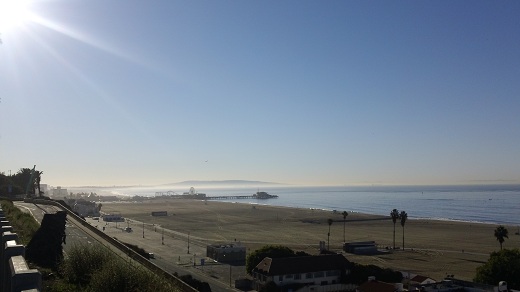 Santa Monica Pier in the distance

I have returned from a family funeral in Santa Fe, New Mexico. Good to be back in California.

“While we saw positive numbers in November, December’s totals failed to meet even the latest revenue projections,” said Controller John Chiang in a statement.  “Coupled with higher spending tied to unrealized cost savings, these latest revenue figures create growing concern that legislative action may be needed in the near future to ensure that the state can meet its payment obligations.”

Revenue fluctuates throughout the year, with shortfalls being erased or exacerbated month to month. Brown’s Department of Finance pointed out that the gap is less than a 2% drop off from the state’s $8.41-billion revenue projection for December.

Gov. Jerry Brown has found a new pot of money to help him fill a $9-billion hole in his proposed budget: $1 billion from auctioning credits to allow California companies to emit greenhouse gases.

But business groups are already denouncing Brown’s plan as a back-door tax increase that they intend to challenge in court if the proposal is approved as part of the state budget for the fiscal year that begins July 1.

“At a time when the public is concerned about jobs and the economy, the budget proposes a new tax on California businesses for climate change activities,” said Dorothy Rothrock, vice president of the California Manufacturers and Technology Assn. “The anticipated $1 billion is not windfall revenue. The funds will be paid by California employers suffering the worst recession since the Great Depression.”

The so called cap-and-trade system is a critical piece of AB 32, California’s landmark legislation aimed at cutting carbon dioxide emissions to 1990 levels by 2020. Modeled on a European program, it sets a cap on emissions of carbon dioxide, methane and other greenhouse gases for each industrial polluter or electric power plant. Facilities can exceed their cap only if they buy credits of other plants that have extra ones after reducing their own releases into the atmosphere.

The first auction, tentatively set for August, is projected to raise as much as $1 billion, which would be earmarked to “create jobs and deliver public health, economic and environmental benefits” as part of the state’s effort to curb global warming, the governor’s office said.

One of the most controversial businesses taken over by Bain Capital, the company Mitt Romney ran for 15 years, was Anaheim’s DDi, which makes printed circuit boards. The company would eventually flounder, but not before Bain got 200 percent of its investment back.

As with much of Bain’s track record, it’s hard to know exactly how much credit or blame to lay at Romney’s feet. But rival Newt Gingrich was apparently referring to DDi today when talking about a company in an similar situation that Romney and Bain “looted.”

Romney touts his stint at Bain as proof of his ability to create jobs, while Gingrich and other critics point to the numerous firings, mass layoffs and bankruptcies that resulted from takeovers by the equity firm. I’ll get into the weeds of Romney’s record at Bain in a subsequent blog post, but wanted to first detail what happened to the company Bain took over in our own backyard during Romney’s 1984-to-1999 stint.

Bain invested $41 million in DDi starting in 1996.  Bain took the DDi stock public in 2000 and eventually liquidated most of its stake in the company, selling shares to the public as well as distributing them to its investors and partners. It generated at least $93 million from selling the stock, according to a 2003 Register story.

And just in time. The tech bubble burst and by the end of 2002, DDi defaulted on debt and cut its workforce by 1,300 workers, to about 1,900. In 2003, it filed for Chapter 11 bankruptcy reorganization. Later that year, the SEC cited Lehman Brothers, one of four investment firms that took DDi public, alleging it pressured analysts to lie about DDi’s worth.

The effort to place a public pension overhaul before California voters this November has moved into a new and challenging phase.

Backers have reported contributions from but a handful of donors, and on Tuesday bashed Attorney General Kamala Harris for what they said was a “grossly misleading” official description of their measures.

Experts say the group needs a huge infusion of cash quickly to have a chance to put one of its two proposals before voters. They are competing with up to a dozen serious initiatives also in play for the November ballot, and changes to districts and new election rules could siphon off even more money.

“It’s a crowded environment,” said Tim Rosales, a Republican political consultant with the Wayne Johnson Agency in Sacramento, “and a depressed economy.”

The law sets a 150-day deadline from Monday for the group to collect 807,615 signatures from registered voters to qualify one of the two measures for the ballot.