Governor Jerry Brown will deliver his State of the State address on Thursday, January 24 at 9:00 a.m. before a joint legislative session.

Events around the Capitol:

A new poll shows gay marriage has arrived in California – in public opinion if not in state lawbooks.

Golden State registered voters now favor same-sex unions by 59 percent to 34 percent, a 25-point gap that is the largest margin of support for the issue in the three-plus decades the Field Poll has been asking the question.

The new Field survey shows support has leapt markedly in the three and a half years since California voters approved Proposition 8, which banned gay marriage, 52.3 percent to 47.7 percent.

The poll showed increases in support virtually across the board – among voters under 64, non-white voters, Catholics, Republicans and nonpartisans.

Poll Director Mark DiCamillo said the move to a 25-point gap goes beyond the gradual increase in support that has been expected as young voters age and “replace” older voters in the electorate.

“This is now showing that opinions are changing irrespective of generational replacement,” DiCamillo said. “This is real change.”

As more states approve same-sex marriage – Washington and Maryland this month became the seventh and eighth states where legislatures have given their OK – the legal battle in California continues.

California Fish and Game Commission President Daniel Richards said Tuesday that there is “zero chance” he will resign over a photograph showing him grinning as he holds up the body of a mountain lion he shot, killed and ate in Idaho recently.

In a letter addressed to Assemblyman Ben Hueso, D-San Diego, one of dozens of public officials who called for Richards’ resignation in recent days, Richards blasted lawmakers and others for their criticism of his hunting expedition and mocked their condemnation of the kill.

Richards wrote that he did eat a cougar for dinner, did not use a high-powered rifle and said he has “consistently supported” conservation efforts as a commissioner when they were backed by scientific evidence. He compared his actions to a California official gambling in Nevada.

While it’s legal to kill the big cats in Idaho, California has banned the hunting of mountain lions since 1972, and voters have twice renewed that restriction. After the photo surfaced online this week, at least 40 lawmakers and Lt. Gov. Gavin Newsom called for his resignation.

Newsom, in a letter, said the “actions call into question whether you can live up to the calling of your office,” and “do not reflect the values of the people of California.”

Dan Richards, who chairs the California Fish and Game Commission, is under fire in the Capitol because he killed a mountain lion in Idaho and posed with his trophy for a picture that was later published on a hunting publication website.

Forty Democratic legislators signed a letter to Richards saying he should resign. “Your actions raise serious questions about whether you respect the laws of the people of California and whether you are fit to adequately enforce those laws,” the lawmakers told Richards. Lt. Gov. Gavin Newsom later joined the chorus.

So let’s get this straight.

First of all, Richards is not Dan Richard, who chairs the state’s High-Speed Rail Authority and has more than enough controversy of his own.

Back to Richards, the Fish and Game Commission chairman.

Mountain lion hunting is illegal in California, thanks to a ballot measure approved by voters in 1990. It is, however, not illegal for mountain lions to hunt human beings, as several attacks attest.

Nor is it illegal to hunt mountain lions in Idaho, and Richards’ trophy was perfectly legal. “I’m glad it’s legal in Idaho,” he told the Western Outdoor News website.

So Richards appears to be guilty only of offending the sensibilities of the Legislature, whatever they may be.

Attending California Republican Party conventions in recent years as an observer has always been something of a surreal experience. They are gatherings of like-minded people who enter into convention halls and then pretend that there is no world outside.

I first attended one of these events in 1998. At that time there were 5.3 million Republican voters in California, 7 million Democrats and 2.6 million independents.

Fourteen years later, there are about 1 million more independents, about a half-million more Democrats — and about 200,000 fewer Republicans.

In other words, over the last 14 years the California electorate has grown by the equivalent of the entire population of Nebraska, but not a single one of those Cornhuskers chose to register as a Republican.

Most court observers and political pundits figured that the Proposition 8 supporters (California’s initiatve law that defines marriage as between a man and a woman) would directly appeal to the United States Supreme Court. But, I guess not.

Charles Cooper, the lead attorney for the proponents of Proposition 8, tells Metro Weekly that the proponents of the California marriage amendment will be asking the full U.S. Court of Appeals for the Ninth Circuit to review the three-judge panel decision issued on Feb. 7 holding that Proposition 8 is unconstitutional.

Although Cooper, of Cooper and Kirk PLLC, told Metro Weekly the filing has not yet been made, the filing is expected later today as today is the deadline for the filing to seek en banc review.

The move almost guarantees that the U.S. Supreme Court will not consider the case before this November’s presidential election.

Usually, en banc review involves all of the active judges on the court, but the Ninth Circuit — due to the more than 20 active judges on the circuit — has adopted a unique “limited en banc” procedure in which all the active Ninth Circuit judges vote whether en banc consideration will be given but only 11 judges hear the en banc consideration. That will be the request made by today’s filing by the proponents.

This is an interesting development in gay marriage litigation and takes the issue away from the U.S. Supreme court during an election year. Since it is likely there will be a continued stay in the case, gay marriage will not be legal in California for at least a few more years.

Read the comments over at the Volokh Law Blog here where they discuss the probable rationale by the Pro- Proposition 8 supporters and possible scenarios in the case.

California Proposition 8 on Gay Marriage Back in Court Today

Actually, there will be two hearings today at the Ninth Circuit Court of Appeals.

Proposition 8 is back in the news as three federal appellate judges in San Francisco hear arguments in not one, but two cases related to the gay-marriage ban.

The first case involves the appeal of a ruling to allow the release of videotapes made during the original trial. That hearing starts at 2:30 p.m.

In the second case, Proposition 8 backers had wanted a lower court to overturn Judge Vaughn Walker’s decision declaring the measure unconstitutional, and their argument was this: Walker should have been disqualified from hearing the case because he was in a same-sex relationship. Their motion was denied. They’re appealing that decision. The hearing starts at 3:30 p.m

Note that the Justices of the three judge appellate panel are not hearing the main appeal of Judge Walker’s decision to declare California Proposition 8 unconsititutional. If you recall, Walker invalidated Prop. 8 which was a California State constitutional amendment (passed by the California voters) which defined marriage: “only marriage between a man and a woman is valid or recognized in California.” 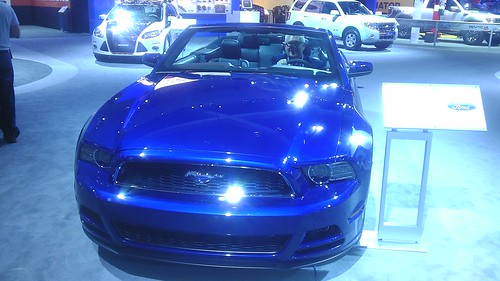