Former Massachusetts Gov. Mitt Romney is maintaining his edge over a surging Texas Gov. Rick Perry among Republicans looking to California’s June 2012 presidential primary, according to a new Field Poll.

The poll shows Romney’s support has dipped slightly since June while Perry more than tripled his. But Romney still holds an eight-point lead.

“Perry really hasn’t taken it out of the hide of Romney, and that’s good news for Romney,” said Poll Director Mark DiCamillo.

Romney and Perry are the only Republican candidates with positive image ratings among GOP voters. “It looks like it’s boiling down to a two-person race,” DiCamillo said. “The others just aren’t stacking up as well in comparison.”

It is a two person race and this poll continues to have Sarah Palin, Michele Bachmann and Newt Gingrich in the sample. They and all of the others will not be around by the time Californians vote in June of 2012.

The next Field Poll will not include some of these candidates and Perry may very well do better against Romney. I assume he will unless Perry implodes or has another very poor debate performance like Monday in Florida.

Also, since Rudy Giuliani the California popular former NYC Mayor and Rick Perry are friends, an endorsement could go along way.

In all reality though, the race will probably be decided in April and/or May before an expensive media campaign comes to California in June. 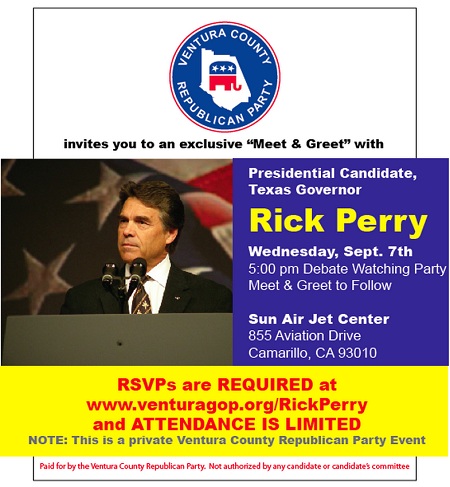 We have exciting news to share with you! The Ventura County Republican Party is hosting a meet and greet with Texas Governor Rick Perry this Wednesday, September 7th in Camarillo immediately following the Republican debate.

Please come and join us for a debate watching party at 5pm at the Camarillo Airport. Governor Perry has chosen Camarillo as one of his stops on his California tour, and will be meeting with us following the debate at the Reagan Library. See below for all of the details.

Important
There is NO COST for this event but attendance is LIMITED and RSVPs are REQUIRED through www.venturagop.org/rickperry. For security reasons, there will be no on-site registration. No exceptions. So RSVP today!

Looks like a great event and I will try to make it.